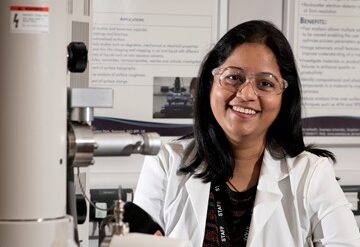 Anitha Devadoss is the Senior Aerosol Scientist at IOM within the SAFENANO team. Anitha’s research focus is to develop Aerosol Risks Diagnosis and Intervention platform to investigate the pathways of nanomaterials mediated aerosol risks to human health & environment and develop new indicator materials and analysis methods for occupational disease diagnosis and intervention. She is particularly keen to explore and assess the aerosol induced health risks (dermatitis, asthma, lung diseases, and cancer) and smarten the disease diagnosis pathways via developing/adapting innovative technologies, and standardizing the diagnostics methods.

Anitha is a PhD graduate in Chemical Sciences from Biomedical Diagnostics Institute, Dublin City University, Ireland (2008-2011). Following that she had international post-doctoral research experience in South Korea (2011-2013), Japan (2014-2015) and UK (2015-2017). She was a Ser Cymru II MSCA COFUND Fellow at Swansea University which was jointly funded by European Commission and Welsh Government under ERDF (2017-2021) to establish her independent research team. Anitha has over 10 years of research expertise in nanomaterials synthesis & analysis, innovative nanobiosensors development, advanced healthcare technologies, and point-of-care diagnostics. Anitha has developed various proof-of-concept sensors (enzymatic, non-enzymatic and immunosensors) for the detection of various analytes such as glucose, H2O2, glutathione, proteins. Past research projects as PI and Co-I includes the development of graphene based sensors for the point-of-care diagnosis of Cancer, Hepatitis, and Dementia, funded by the European Commission, Welsh Government, EPSRC and Innovate UK.

This project has received funding from the European Union’s Horizon 2020 research and innovation programme under AURORA grant agreement No 964827.

Webdesign » SPRANQ
We use cookies on our website to give you the most relevant experience by remembering your preferences and repeat visits. By clicking “Accept All”, you consent to the use of ALL the cookies. However, you may visit "Cookie Settings" to provide a controlled consent.
Cookie SettingsAccept All
Manage consent

This website uses cookies to improve your experience while you navigate through the website. Out of these, the cookies that are categorized as necessary are stored on your browser as they are essential for the working of basic functionalities of the website. We also use third-party cookies that help us analyze and understand how you use this website. These cookies will be stored in your browser only with your consent. You also have the option to opt-out of these cookies. But opting out of some of these cookies may affect your browsing experience.
Functional

Analytical cookies are used to understand how visitors interact with the website. These cookies help provide information on metrics the number of visitors, bounce rate, traffic source, etc.